Examination of the Origins
Francesca Referza


Melsheimer explains: "The idea behind the title is my interest in some of Turin's housing. My interest focuses on twentieth-century Italian architecture, the coexistence of Rationalism, the Novecento and the Roman School during Fascism. I am also interested in their continuation to the 1960s, joining with new influences, such as Frank Lloyd Wright's Organic Architecture from the United States. Another inspiration in developing the project was Quartz's space, especially its floor and its hexagonal tiles."

Twentieth-century Italian architecture is a springboard for Melsheimer's personal reflection, starting from several buildings that were key parts of architectural design in Turin and Milan in the 1950s and 1960s. She particularly focused on several famed buildings, such as the Velasca Tower by Studio BBPR in Milan, which preserves an aesthetic sense of the medieval city; the INA-Case Falchera housing district; the Bottega d'Erasmo by Gabetti and Isola, which brings back the tradition from the early 20th century in Turin and was termed neo-Liberty style; the Palazzo del Lavoro by Pier Luigi Nervi, a spectacular example of the architect's "structuralism;" and the innovative Palazzo delle Mostre (PalaVela), designed by the engineer Franco Levi and architects Annibale and Giorgio Rigotti. Then there are two lesser-known buildings by Enzo Venturelli, which are fascinating for their originality: the home/studio of the sculptor Umberto Mastroianni and the aquarium-reptile house in the zoo, for which Venturelli coined the terms Architecture for the nuclear age or Atomic architecture. The architecture accomplishments achieved in Turin in the mid-20th century are a natural outgrowth of its cultural vibrancy, bolstered by its industrial development and figures the likes of Lionello Venturi, Edoardo Persico and Riccardo Gualino. After World War II, Turin was much more about opening to Europe, compared to Rome, buried in its classicism or Milan, which had become an expression of 20th-century architects' "return to order." Italian Neorealism, most firmly established in literature and film, also made its influence felt in architecture, fostering a return to "roots" based on drawing from local traditions and construction techniques, which moved away from Rationalism.

As Melsheimer noted, in Italy, more than anywhere else, the attempt to go beyond the modern movement took off in a multiplicity of directions with different inspirations, often with contrasting results, and was not always warmly welcomed by contemporary critics. The artist stitches the narrative of this special period in Turin architecture into images on the fabric of a curtain hanging from the ceiling to the floor and covering part of the cement tile floor. Several cement and ceramic sculptures are placed on the curtain on the ground, popping up all about like in a winter garden. These simple, minimalist structures are designed based on the hexagonal shape of the cement tiles, a common feature in Italy on floors between the late 19th and early 20th centuries. Melsheimer has long been interested in architecture and landscape as a whole. Here she again turns the tangible quality and power of built forms into a delicate, unstable installation, with minimalist embroidered designs and small sculptural forms closely connected to one another. The curtain drops from above down to the floor, softening the right-angled opposition between the vertical wall and horizontal floor. This makes for a unique installation that imperceptibly transforms the space. The artist starts from the geometry of the cement tiles on the floor and conceptually opens Quartz's walls as she extends her gaze to Turin's urban and architectural history with its many extraordinary buildings—many of which have fallen into disuse or been inexplicably forgotten. 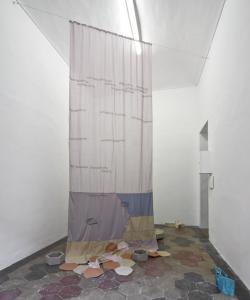 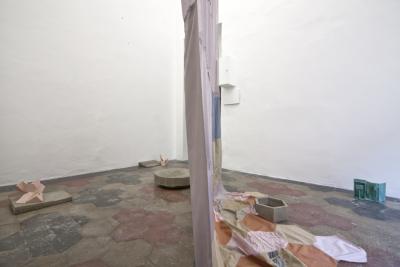 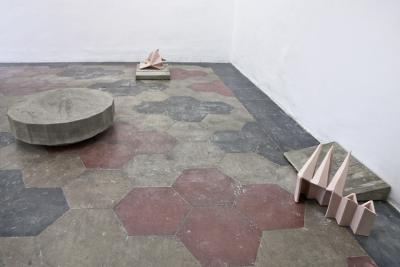 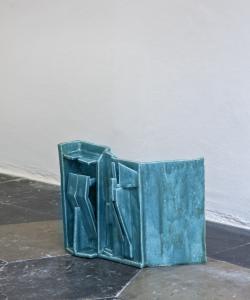 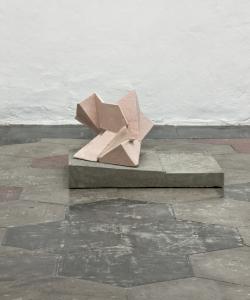 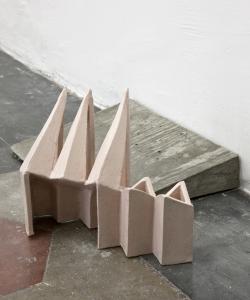 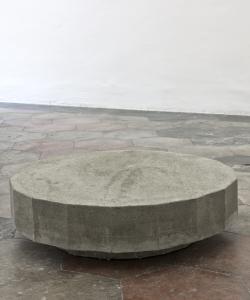 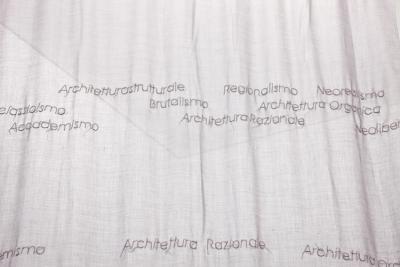 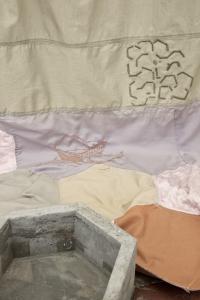